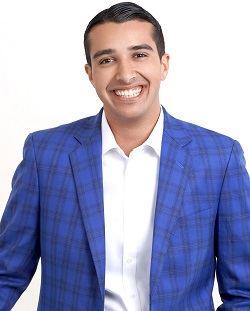 Abbas was born & raised in Iraq. Growing up, he remembers having to sleep on concrete floors because his family was so poor to the point where they couldn’t afford to buy beds to sleep on.

Abbas immigrated to the US at the age of 11, and years later, decided to get into Real Estate at the age of 18, paying for his start-up costs on a $5,000 credit card he had at the time. After spending a full year making thousands and thousands of cold calls a day to generate clients, Abbas got his first listing in the Bay Area as an agent, and within a year after that, became one of the top producing Real Estate agents in the bay area as his business rapidly grew.

After his second year in business, Abbas started implementing systems & models to scale the business and started hiring virtual assistants all across the world to expand his business. As a result of that, his business grew rapidly and Abbas became one of the top 50 agents nationwide with RE/MAX in less than 5 years of being in business.

Eventually, Abbas decided to start investing cash flow from his business into assets that can provide passive cash flow and appreciation. After looking at multiple approaches, including stock & single-family homes as an investment, Abbas wanted to have access to a different type of asset that would allow him to invest in the top performing markets in the US at scale, while also having control of the values and not just relying on the market. As a result, Abbas chose to focus on investing in Multifamily Real Estate.

Within a year, Abbas invested in over 1500 apartments in top performing locations in Texas. He eventually also exited his Real Estate sales business and went full time into running Model Equity LLC with the mission of reaching $1 Billion in assets under management in the next 5 years alongside investors.